Recently a full map of GTA 6 game, which is only under development, was leaked to the Net. Looking at it, any fan of the GTA series will be furiously delighted, but at the same time will be upset, because he will realize that the game will not be able to play soon – at best right after the release. However, at the moment nothing is known not only about this release date, but even about the announcement date.

There are several large cities on the map – at least five of them are huge metropolises, many of which have already familiar names such as LibertyCity, CiceCity and LosSantos. And these cities are separated by long distances. Of course, the area between them is not deserted, and there are also some settlements, though already smaller.

You can see that the game world consists of three main islands. The largest of them is located mainly on the bottom left side of the map and extends from West to East. The city of Los Santos is on the west bank and Vice City is on the east bank.

Las Venturas is located in the center of the island. At the top is the second largest island, which also stretches from West to East, but is much smaller in width. The largest city here is Liberty City, which is located on the east coast.

The islands are connected by several bridges. Between them is another islet, where the city of San Fierro is located. The scale of the map allows you to see not only cities, but also various biomes: wide sandy deserts, green and white mountains, forests, valleys, etc.

By looking at this card, players want to believe that it will really be in the game. However, despite the reliability and careful study, it may turn out that the card presented will have nothing to do with the game world of the coming sixth part of GTA.

After all, from the staff of RockstarGames no official confirmation that the card will look like this. About when it will be released in the game GTA 6, nothing is known. And the card described above can actually be only a fantasy of the game fan.

However, it is quite possible to expect that the world really will be so huge and diverse. After all, the game will have no restrictions, because it will be released on the newest consoles – PlayStation 5 and a similar power brainchild from Microsoft- Xbox Series X.

In the skills of RockstarGames programmers there will be few doubts, because every next game they play is always much better than the previous one, especially GTA series. 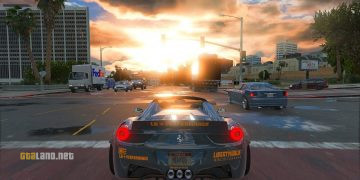